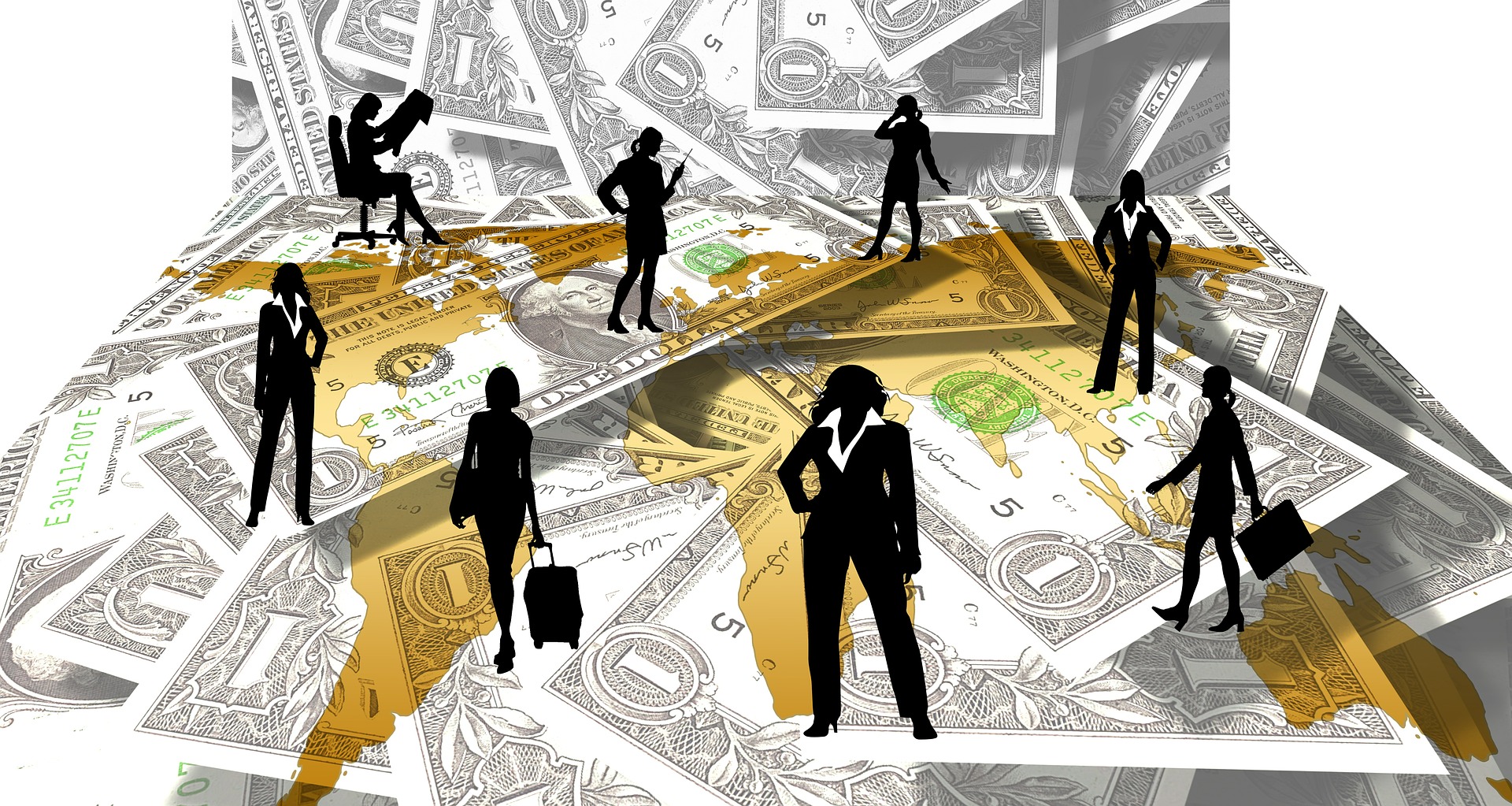 How Women Can Successfully Negotiate a Pay Raise

You know you provide a lot of value to your company. You go above and beyond your role each and every day. You’re qualified for a promotion.

But here’s the thing – as a women you aren’t conditioned to negotiate for a pay raise. You’re afraid of what asking for one will do to your reputation. And maybe you doubt your capability to handle a more a senior role.

It’s time to break this limiting belief. Because the cost of not pursuing what you are capable of and deserve is this: An unfulfilled career, a company that’s robbed of your great potential, some US$500K-$1million of more money in your pocket over your lifetime, and the difference between an financially enjoyable and financially strained retirement.

So, are you ready to have that essential conversation and be successful? Here are some Do’s and Don’ts when asking for that pay raise or promotion:

Whether your vying for a raise or a step up the career ladder, you must be prepared to prove your value to the company. So, make a list that specifically shows how your contribution has helped the organisation meet and exceed its goals. Did you bring in more clients or revenue for them? Did you save your division money and if so how? How were you a leader in a project? Can you demonstrate how you mobilised members for a common goal? Have you taken on additional responsibilities and managed these well?

Focus on the positives. Approach the list by thinking about not just what you did but how it fits into the company’s culture and values.

Do Be Clear on What You Want

If it’s a raise you want, be clear on what percentage increase you’re asking for. And then ask for more. Yes, you heard me. Because that’s your starting negotiation point with the final number likely to be lower if a raise is approved.

Where possible, you’ll want to do some research on what someone with your responsibility and experience typically makes,. You may be able to find statistics on websites like “Glassdoor” or know a recruiter friend in that field. If you happen to know what your colleague makes, that can be helpful, however never reveal you got details from your co-worker as it can be frowned upon.

If you’d like to be considered for a promotion, stick to the contribution conversation for now. Negotiating a raise that’s in line with the new role will come after you’ve been made an offer and you can apply the above then.

Do Practice the Conversation

Having a meeting with your boss to discuss a pay bump or your career ambitions can be no doubt filled with anxiety. It’s normal even when you know you deserve that recognition.

So practice what you’ll say with a friend or family member. Have them ask you questions and even squelch your requests so you know what to say and how to handle any rebuttals. And pay attention to your body language and expressions.

Do Time Your Requests

Timing is everything and yes, even in this case. Often, raises and promotions at companies coincide with performance reviews so a few weeks before that may be the ideal time to discuss a raise or promotion so it’s considered during the actual review period. If you feel the next review is too far away (more than six months) then a good time to ask to have a chat is after you’ve accomplished something great and received praise or positive feedback. Another ideal time would be when your company or division has performed well and it’s reflected in the financials. 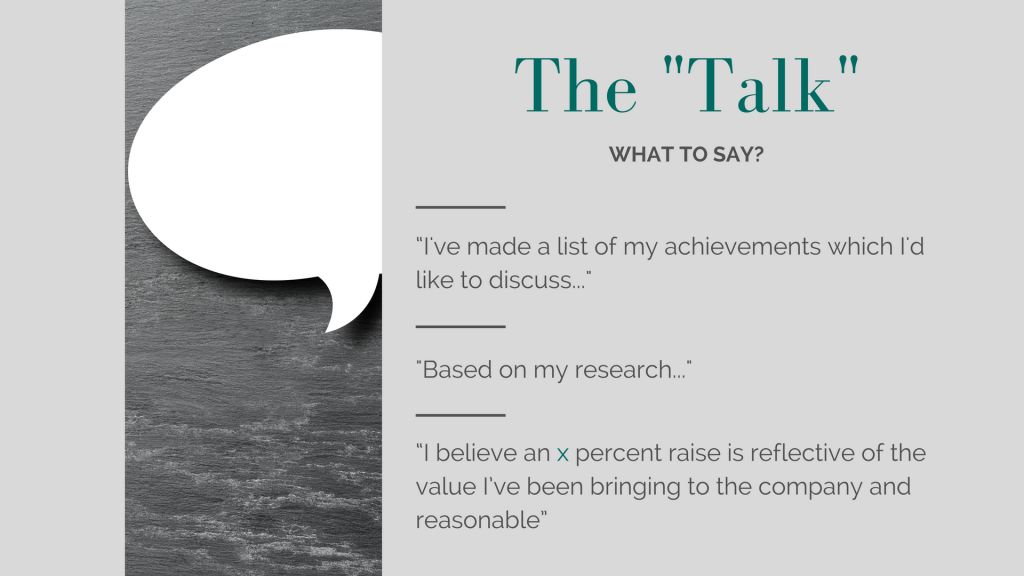 Don’t Write Your Requests by Email

A salary raise or promotion needs to be discussed in person with your manager. Otherwise it can be perceived as you lack confidence and don’t really feel you deserve this. Speaking face to face will also give you a chance to gage your boss ‘s reaction and address any concerns and wishes either of you have.

Don’t Get Emotional or Personal

It’s unfair but women are often labeled as emotional or too bitchy or too aggressive when in a job and requesting something. Keep this in mind, and keep your cool. Secondly, don’t raise personal reasons for wanting a raise even if you are on friendly terms with your manager. It doesn’t matter to the company that you’ve had another baby and need more money, or your partner has lost their job. It’s about your merits only so keep to the facts of your case.

Don’t feel bad if your request is turned down. A “No” is not necessarily a “No never” – it’s likely a “No, not now”. There may be valid reasons for not giving you what you want such as budget constraints or other plans that you may not be aware of.

Take the opportunity to learn more about your manager’s view on how you’re valued and if there’s anything you need to work on to get what you want. This may also open the door to other requests. For example, if he/she can’t give you a raise or promotion, there may be other things you can discuss such as extra holidays, the company paying for a course or conference, or you being put on a high-profile project to stretch your skills. After all, a salary is not the only thing you can negotiate.

The conversation is not the time to give ultimatums if your manager says he or she can’t or won’t entertain your requests. Giving one can have you seen as being impatient, non-committed in the first place or emotional. If you decide you will pursue opportunities elsewhere or have another offer, you can inform them at another time. If you can view the discussion as a tactic to achieve a bigger prize rather than a battle, you’re more likely to come out with a happy ending without tarnishing the goodwill you’ve built with your boss.

Research shows that men are more successful in salary negotiations than women. On one hand they ask more often, but there are also biases towards how women approach the negotiation. Don’t let any of this stop you. Follow the above guidelines and remember that companies are much more sensitive regarding all the press the “wage gap” is getting. This works in your favour, more today than ever before. Good luck!